A Brief History Of Eggnog: It’s Past, the Infamous Eggnog Riot… It’s Stranger Than You Think

Eggnog has been around a lot longer than refrigeration — in fact, the first drinkers of the mixture of milk, eggs, sugar and cream enjoyed it hot. Maybe that’s where the idea of adding alcohol came from: Nobody could quite stomach the idea of drinking the concoction without getting hammered.

Here’s a look at how eggnog came to be associated with the holidays… it’s stranger than you think.

Through the early days of eggnog, nobody seemed to know the exact origins of eggnog, but it is noted to have originated through England centuries ago. According to a food blog written by Frederick Douglass Opie, a food history professor at Babson College, it originally was a wintertime drink for the British aristocracy. The name evidently came from two words – grog, another word for rum, and noggins, a word for the small wooden mugs that the drink was served in.

At first, in England, the drink was non-alcoholic, and, as noted, served warm or hot.

It continued to be served hot for many years — through historical references to “hot egg nog” in newspaper articles going back as early as 1818. People were still drinking it hot in the early 1900s; here’s a quick reference to hot eggnog in a 1917 food magazine.

During the 1700s, when American colonists began drinking it, they started adding rum, which wasn’t heavily taxed in the way that brandy and wine was, according to Opie, who also noted in his food blog that rum was easily accessible, since it was traded in the Caribbean. But ultimately, any liquor became fair game.

By the time we get to the 1800s, several generations had grown up drinking eggnog, and it had gone from a wintertime drink to a treat that was part of the holiday tradition. Which is how we get to the point in history known as the Eggnog Riot of 1826. 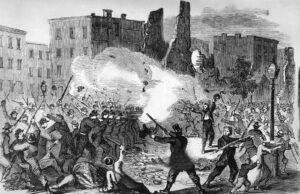 The Eggnog Riot of 1826. The Eggnog Riot of 1826 (seriously, that’s what everyone calls it) took place in West Point, New York, at the United States Military Academy on December 24 and December 25, 1826. Earlier in the year, the Superintendent of West Point, Colonel Sylvanus Thayer, had banned alcohol from the premises. It was a rule that was instituted for good reason, evidently, because when it was time for the annual Christmas party, cadets managed to bring a lot of whiskey on campus, mixed up some eggnog, and all hell broke loose.

In an act mirroring a more modern day script of The Hangover move. According to Smithsonian Magazine, which has a lengthy account on the matter, at least 90 cadets partook of the eggnog and went out of control. Two officers were assaulted, along with windows in the North Barracks. Banisters were torn from the stairways. Plates, dishes and cups were smashed into little pieces. It apparently was quite a night, and one month later, the school court marshaled the worst offenders – 19 students. Ultimately, 11 of the cadets were expelled from the school.

The rest of the 1800s. As the years went on, eggnog remained a favorite of soldiers (and pretty much everyone). As a letter writer said of soldiers drinking eggnog during the holidays, writing on December 25, 1846, which appeared in the “Louisville Courier Journal” on January 11, 1847, “Eggs are very plenty and very cheap, and lots of eggnog are to be drunk. The ‘boys’ are bound to do it.”

On December 31, 1859, an editorial in “The Chicago Press and Tribune,” lamented how even the politicians in the U.S. House of Representatives were not immune to eggnog’s charms.

“Eggnog has ruled the country today,” began the editorial. “It is a famous drink in public and private houses in Washington on Christmas, and some of the members, in spite of it, reached the house today at noon, and some, in consequence of it, did not get there at all.”

Eggnog also became a favorite drink not just for the Christmas holidays, but, not surprisingly, given the alcohol component, New Year’s Eve. Due to the alcohol that was virtually always involved, there are a number of articles in 19th century newspapers detailing fights and even some stabbings of people who got into trouble after drinking a bit too much eggnog.

The recipe for eggnog would vary over the decades, but the general idea stayed the same – load it up with alcohol.

And as we promised in the headline, a brief history of eggnog during the 20th Century, so let’s just look at four quick nuggets of eggnog history: 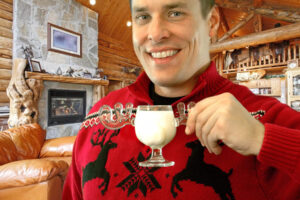 Today, in the 21st century, eggnog sales have shot up in the last 50 years, quadrupling to where we drink 130 million pounds of the stuff during the holidays.

Now, of course, you can buy all types of flavored eggnog… for instance, Pumpkin eggnog, Vanilla eggnog, Cinnamon eggnog, Caramel eggnog, as well as other different, new flavors.  their traditional Golden Eggnog. You can even find eggnog flavored ice cream and coffee. And some people tout eggnog flavored protein powder. Well, you get the idea. Eggnog has come a long way over the years, though I doubt anything will be sold over these holidays worth rioting over… maybe?

*Geoff Williams, A Brief History Of Eggnog: It’s Past, the Infamous Eggnog Riot… It’s Stranger Than You Think; Forbes, January 19, 2018